I've been asked to beta-test this amazing new analogue sequencer DIY project. Its called the Klee (pronounced clay) Sequencer and is designed by the great Scott Stites.

Its a very large undertaking! But a good chance to try out some new techniques, especially in the making of the frontpanel. Here are initial pics of the panel layout and the panel under construction. The slider slits were the main worry but have turned out well - these were CNC'd, milling off 0.25mm from the 3mm thick panel with every pass. A good few hours of intricate work, but that's a splash in the ocean for this project!

There's still a lot of work to do (plenty of wiring!) and I'll update pics as things progress.
The project began on the electro-music.com Synth DIY forum and there are several threads running which have further details about it:
Original thread - details of the evolution of the in
Thread two - more about the finalised KleeSeq project and the PCB project
There's also a page on Scott's site (here) which gives some details about the features / operation.
Posted by BugBrand at 10:13 No comments: 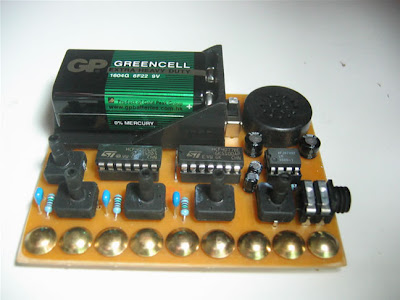 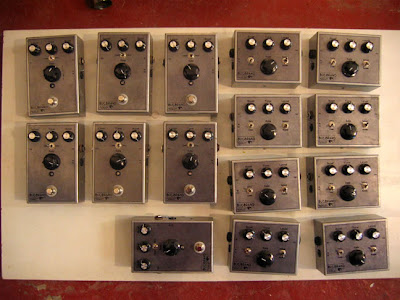 PostcardWeevil07 - adding in a further oscillator, a second ringmod stage and a mini-jack output... Tri-Osc Ring-Mod Porta-Synth!
Details and sounds on the main BugBrand site
Note - the initial batch of 8 sold out very quickly - I'm working to re-stock the shop later this week...

BabyBugCrusher9volt - desk & stomp versions
Building a batch of 15 is quite a mission! Most of these have been taken now..
Again, more details and sounds on the BugSite

Posted by BugBrand at 10:07 No comments: