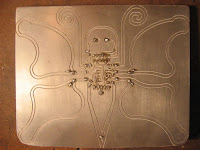 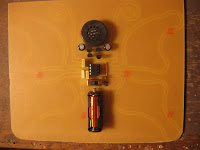 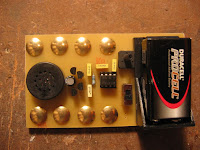 I built a few crackleboxes (kraakdoos) a couple of years ago and they were quite fun but a bit wierd. I'd got the circuit off this site but its recently been updated with some changes to the circuit and this really works a lot better now. DIY one yourself - check ebay for the elusive 709 opamp (search for LM709*).

The Butterfly is routed & tinned - the wings & antennae are touchpoints & all the circuit lives in the body. A little N 12v battery provides the power. The other one was built quickly like a Postcard Weevil to test out the new circuit changes and proved to workout really well.

[I'm not doing these for sale, by the way]
Posted by BugBrand at 00:14 No comments: Links to this post 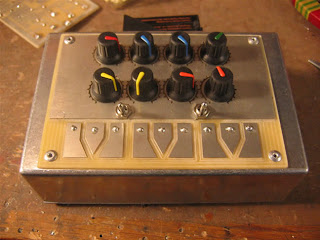 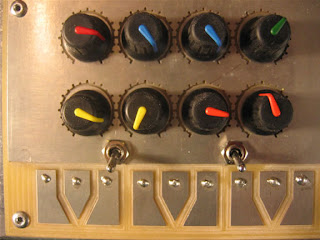 So, finally, here's the new Weevil07 prototype. This proto is a bit of an experiment to try a few new techniques. I've not scheduled proper production yet, but will be doing a couple more prototypes shortly - these'll certainly be a little bit bigger as this design is a little too cramped - bigger touchplates, better knobs and spread a bit further apart. Must add the internal speaker too...

The New Stuff:::
Front Panel - this tries out some CNC ideas. Its made from an engraved PCB (tinned) with 9 contact plates and dial engraving around the knobs. I've chosen not to add labels for the controls.

Oscillators - again, like previous Weevils, you get two oscillators that are ring-modulated together for a bunch of audio chaos. There's a switch for low or hi freq and there's a new pulse width control for each osc - ranging from 50% sqr wave up to a very narrow pulse. The low power circuitry is a bit different too - again this just starves the oscillators, but behaves quite differently from the old designs.

Filter - this is much more powerful than other Weevil filters. Actually, its similar to what I used on the one-off Weevil Knievel - a 2pole resonant low pass filter - pretty gnarly with the resonance turned up.

Touchpoints - there's 3 points for each osc (two pitching and one pulse width) - the outside sets of touchpoints. The central 3 are - ringmod output, ground and filter mod (touch this to open up the filter)

So, as I say, general production is still a way off, especially with a bunch of projects coming up for me... Stay informed with updates via the BugBrand mailing list

Posted by BugBrand at 10:54 7 comments: Links to this post

The first picture is an engraved name-plate badge (to wear on my labcoat for live shows - yes, tongue-in-cheek) using sheet aluminium. This is a good test for making front panels - I've been using Abacom's FrontDesigner software (good value!) which exports .plt files which are then imported into Lazycam which comes with the Mach3 routing software. Initial tests had had the scaling all wrong, but I've now figured how to set things up in Lazycam and its all working good.

The 2nd image shows PCB isolation routing - automated circuit board manufacturing or at least semi-automated. Using Eagle and PCB-GCode (available from Cadsoft) you generate two files - one with routing info to route out the tracks and then a 2nd with drill info - change over the bit and set it to run drilling all the holes. Having used Press'n'Peel, ferric chloride and a mini-drill for pcb making for the last few years, there's great joy in seeing the CNC machine working its ways with the copper clad board!
Posted by BugBrand at 09:14 No comments: Links to this post 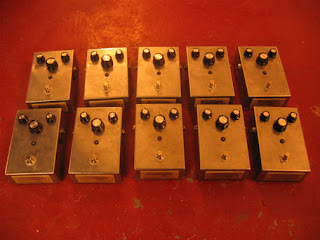 ...ready to go off around the world.

...most of them have flown the nest already! 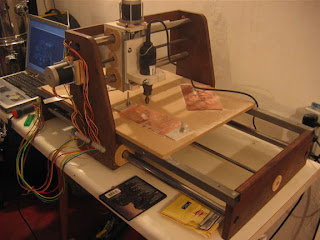 I've wanted to explore CNC for a while, but even going the DIY route its not cheap to get into. I purchased a router kit from CNC Kits & Bits (wooden kit with a large travel area) and then got the driver boards and stepper motors from Routout CNC. Both of these companies are UK based - I'm sure there are options for people elsewhere in the world.

So, after building the machine, adjusting the bearings, fixing on the stepper motors and wiring them all up..... time to try to figure the Mach3 routing software (a pretty complex program) and how to get my circuit designs from Eagle into the required GCode for Mach3. The first attempts got things working a bit (along with also things going a bit out of control - I broke a router bit by rushing ahead without thinking -- moral -> go slow!). A program called PCB-Gcode, run from within Eagle is used to generate routing data (and also will provide drilling data -- auto drilling of all the pcb holes! No more hunching over the dremel drill). 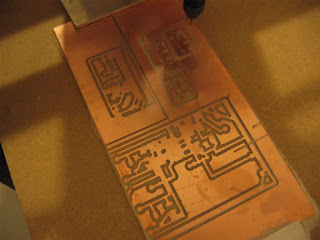 Well, as you can see, I got the settings a bit wrong - routes were cut but I certainly need to tweak the PCB G-code settings some more. Once I'd returned home from the workshop I looked more at the software -- the router needs to do several passes over the board, routing out a little more each time it goes over and running at a very fine resolution. I could see where I'd gone wrong when I started figuring out the path viewer in Mach3. Hopefully I get to try the process out again today...
Posted by BugBrand at 09:33 3 comments: Links to this post 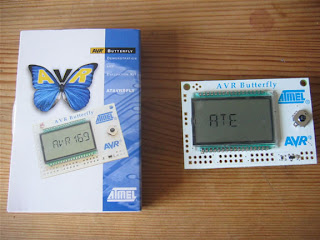 This is the tiny AVR Butterfly I received yesterday - tiny as in smaller than a cassette box!

Its a way into learning about Atmel AVR microprocessors (this is based on the ATMega169 chip). On the little board it has an LCD display, a little joystick (that wart on the right-hand side), temp sensor, speaker for sounds, analogue-to-digital converter and there's meant to be a light dependent resistor but that doesn't seem to be on it (??strange??)

Learning about micros can be a pretty large task (I've been waiting many months to get time to learn about Atmel micros) so I got an intro (e-)book from Smiley Micros - this book is specifically aimed at the Butterfly, but also should give a good understanding of the general use of Atmel chips -- in practice I'd be using chips such as the ATMega16 / ATTiny which are DIL rather than the tiny surface mount ATMega169.

I'll try to keep updating with useful links for learning AVR micros - its an interesting area for synth DIY. There are examples of sound synths using AVRs and also some DSP examples, but my first aim is to use them for control - eg for sequencing.
Posted by BugBrand at 09:23 No comments: Links to this post

We live in a age where there is too much stuff...

My main website is already crammed full of stuff. Its just undergone a bit of a redesign - shuffling the stuff around into new piles. And now there's this new space where I can put more ...stuff...

This blog is going to be a sketch pad for ideas and projects. Quite a bit may be tech-stuff. It'll probably get into an info-fight with the main BugBrand website before too long...

Posted by BugBrand at 10:36 No comments: Links to this post