The Chasms come to Bristol

Richard Quirk is one of my most long-term supporters and also one of the most consistently creative, releasing with his bands The Chasms and Sandfingers and also producing his solo works. The pieces are often recorded in his barn on the Isle of Man or out around the island - follow the links as most recordings are freely downloadable and highly recommended.

On May 4th, The Chasms are coming to Bristol to play at the wonderful Cube Cinema. I am, naturally, very excited. I've actually played his solo record a few times between acts when doing sound there and there has been some surprise when his field recordings of the TT motorcycle race come on. 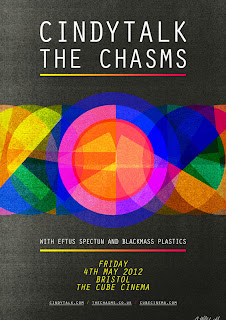 Posted by BugBrand at 08:55 No comments: 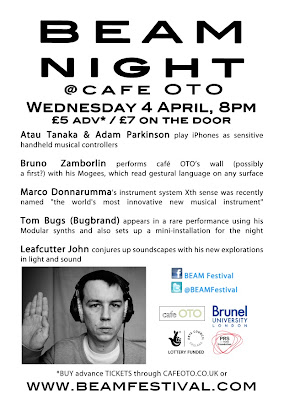 For this night I'll be premiering a new installation/demonstration approach -> five sets of headphones hooked up to the Modular, with me giving 10-minute mini-performances to people throughout the night.
I see this as an interesting and direct method for demonstration -> the stereo sounds go straight into the listener, coupled with a close-up view of what is being patched (even if what is actually going on remains somewhat mystical).
I'll also be doing a 'regular' 20-minute Modular performance on stage.
Posted by BugBrand at 10:03 No comments: